Celestron has been a leader in the optics industry for many decades and their products have become revolutionary.

They produce quality telescopes including entry-level all the way up to observatory models, so have something that will suit anyone regardless of your level. Today we’ll be talking about and reviewing the Celestron C90 telescope which is a 90mm Maksutov Spotting Scope.

We’ll be giving you the low down on its key features, specifications, what we love about it, and anything that we’re not so hot on.

So if you’re keen to find out more about the Celestron C90, then just keep reading. 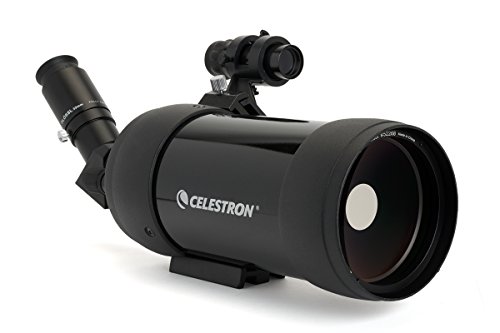 The Celestron C90 is a solid entry-level telescope for those looking to get into astronomy and works great as a grab and go spotting scope whilst staying on a budget.

If you’re looking to start observing the planets, the moon and get up close and personal with any birds, then this will be a great telescope for you as it is so versatile.

The model is attractive, sleek, and modern in design and looks more expensive than it actually is, it’ll also fool any friends of yours into thinking that you’re now a professional astronomer.

It’s easy to assemble and even those with no knowledge of telescopes will have no issues with it, even so, you’ve got the added bonus of a guided manual as well as the Celestron customer service team if you do get really confused.

As it is Mazustok, the C90 has better color correction than most other refractor telescopes and produces vibrant and vivid images.

This Celestron model is photography ready as it has built-in T adapter threads that allow easy connection for DSLR camera bodies to be used to create a lens, so you can share your findings on your social media or just keep them for your own research and observations.

We also went further and purchased the Celestron Universal Phone Adapter so we could capture images and videos directly from our eyepiece, it's compatible with all the major phone devices so snap away and share your images in an instant.

A real strength of this Celestron C90 is how compact and portable it is, allowing you to take it anywhere with you.

The spotting scope weighs just over 4.5lbs and can fit into most rucksacks, however, you won’t need to buy a designated rucksack for your scope as this model comes included with one.

The bag is made from nylon and has great durability to see you through all your celestial and terrestrial excursions.

The bag is also small enough to be a carry on bag on most airlines, so you can take your C90 international if you really want without it getting damaged in the hold.

We recommend you put your mount/tripod in with your luggage as most are too big to carry on board with you.

You’ll get a 32mm Plossl eyepiece included with the C90 model which is good for low power, however, you’ll want to invest in some additional eyepieces with shorter focal length if you want higher magnification.

You can get the C90 up to 200x magnification with some eyepieces, which will allow you to see smaller features like small craters in the moon that you weren’t able to see with a lower magnification.

The C90 comes included with lens caps and covers to protect them from smashing and also to keep your optics super clean.

Celestron doesn't disappoint when it comes to high powered optics and the C90 isn’t any different, it delivers razor-sharp images over a wide field and also 40x magnification which allows you to see Jupiter’s bands, Galilean moons, and also Saturn’s Cassini division.

The magnification is terrific when you consider most other spotting scopes around the same cost tend to come out in fuzzy imagery.

The C90’s focal range will allow you to see images and focus on objects that are as close as 15 feet from you.

You’ll also benefit from the 8x21 erect image finderscope which will help locate your subjects quickly.

A major downside to this Celestron C90 telescope is that it is not weatherproof, so will not be able to be used outside whilst it's raining or snowing unless you have a tent or cover protecting it.

This will affect terrestrial viewing more than celestial, so if you wanted something to view birds, bugs, and other flying objects in all weather conditions then this might not be a good match.

The C90 is not big enough to study objects in Deep Space, so you’ll need to get a larger telescope if you want to observe the galaxies and nebula or globular clusters.

This Celestron telescope is marketed mainly as a spotting scope so does not come with a mount or tripod.

You can always use a camera or video tripod if you own one of those. But if you plan on using the C90 for astronomical use, you’ll need to find yourself a good mount and a diagonal to go with it.

The C90 will mount easily on most astronomical and camera tripods, so you won’t have to search very far to find your new one.

Celestron offers a really good altazimuth mount if you want to have fluid branding across your collection.

The Celestron C90 comes with a lifetime warranty, so if you come across any defects or it needs repairing then you’ll be covered, however, the lifetime warranty doesn’t include general wear and tear or if you happen to break it yourself.

We love how compact and versatile this little telescope is, it fits neatly into the rucksack with spare space to put a water bottle and your lunch if you’re going out for the day with it.

It’s so light and for the quality of the telescope, you’d expect it to be heavy. We love how compatible it is with other eyepieces so we can style them up with no bother depending on what we want to see.

What we don’t love

It’s a little disappointing that the C90 isn’t waterproof, the model is the perfect size to take outdoors for both celestial and terrestrial viewings as sitting in your house can sometimes leave you feeling rather restrained.

Albeit, a cover wouldn’t be too expensive to purchase, but just ruins the convenience of having an easy to assemble and simple to use telescope.

Even if you’re a pro in the field of astronomy, the Celestron C90 will still deliver due to its convenience, compatibility, and sharpness of images.

It’s a great affordable grab-and-go telescope and due to its smaller price tag compared to competitors, you’ll be able to get yourself a quality tripod and extra accessories including more eyepieces.

It’s ideal for both scoping and astronomical use so if you’re a fan of both, then this will become your baby.