If you’re just getting started in astronomy, or you’re an amateur astronomer, you’re likely to be looking for a telescope that combines quality and affordability.

The Celestron Astromaster 130eq is a favorite first telescope for beginners, offering sharp, detailed views of Saturn’s rings, Jupiter’s moons, as well as the best deep sky objects such as the Orion Nebula, the Andromeda Galaxy, and the Pleiades Open Star Cluster. Today we’re going to take an in-depth look at the Celestron Astromaster 130eq.

We’ll be zooming in on the specs, the pros and cons, and giving you the final verdict on whether or not the Astromaster 130eq provides bang for your buck.

Celestron has been a leader in the optics industry for over six decades.

Founded in 1960, it all began when Tom Johnson unveiled the game-changing C8 which sparked the development of a myriad of new products featuring revolutionary technologies and unique innovations. 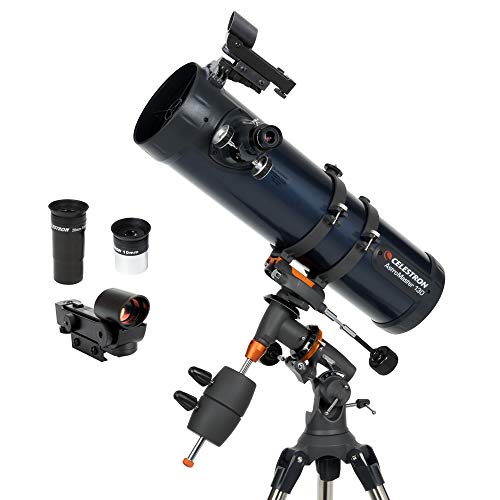 The Astromaster 130eq is a reflector Newtonian telescope designed for beginner astronomers.

With a quick, tool-free set-up and two eyepieces included (20mm and 10mm), the telescope is designed to be user-friendly and has a German Equatorial mount for smooth and accurate pointing.

As Earth rotates, celestial objects appear to drift across the night sky, which can make them difficult to track. The Astromaster has an EQ mount that helps you track objects smoothly by simply turning the knobs.

It’s easy to keep your target centered in the eyepiece thanks to the StarPointer red dot finderscope.

The EQ mount comes with two slow-motion control knobs that allow you to make fine pointing adjustments to the telescope in both Right Ascension and Declination axes, also referred to as RA and DEC.

These allow you to have full control over the telescope to ensure you get the best possible view.

These features also save you time when trying to track specific objects in the sky, meaning you have a better chance of catching sight of those that are fleeting or temporary.

The frame is lightweight but sturdy, providing a steady base for your telescope.

Weighing 28lbs when assembled, this telescope is surprisingly lightweight. Compact and portable, it won't weigh you down despite its magnifying capabilities.

Whether you’re planning on viewing the night sky from the comfort of your garden or hoping to take it further afield on star-gazing camping trips, the Astromaster is easy to grab and go.

The Astromaster includes everything you need to get started with astronomy, making it ideal for beginner astronomers. It comes with two 1.25” eyepieces (20mm and 10mm), StarPointer red dot finderscope, erect image diagonal, and free Starry Night astronomy software.

Offering a lowest useful magnification of 19x, and a highest theoretical magnification of 307x, the high-quality 114mm optics and fully-coated 130mm primary mirror allows you catch sight of the moon, Saturn’s rings, Jupiter’s moon, and deep-sky objects like the Orion Nebula, the Andromeda Galaxy, the Pleiades Open Star Cluster, and more.

With the Astromaster 130eq you’ll get a free download of Celestron’s Starry Night Educational Software, which has over one million downloads and allows you to learn more about the night sky.

You can also download Celestron’s free planetarium app, which allows you to explore the Solar System, including 120,000 stars, over 200 star clusters, nebulae, galaxies, and dozens of asteroids, comets, and satellites—including the ISS.

The app is also compatible with Celestron telescopes, so you can connect your device using StarSense and Wi-Fi technology which allows you to identify or locate any star in the sky so you can begin observing in minutes.

Just bear in mind that Celestron’s StarSense Autoalign and SkyPortal WiFi Module are sold separately. SkyPortal is compatible with both iOS and Android devices.

The Astromaster 130eq offers great bang for your buck. This telescope is highly affordable considering the additional eyepieces it comes with, and it’s made even better by the fact that it’s frequently promoted online so you may get it for an even more affordable price if you’re lucky.

Not only will you get the telescope itself, but with your purchase, you get the 20mm Eyepiece, 10mm Eyepiece, Sky X CD Rom, User Manual, and access to Celestron’s Starry Night Educational Software.

If you purchase a telescope at this price point, it’s unlikely to be top-notch quality. Beginner telescopes usually compromise on quality in order to offer an affordable price, and, if you’re just starting out, then this shouldn’t be too much of an issue for you.

If you’re a little more experienced in the field, you’ll likely want a telescope with a better build and higher quality features, as while the Astromaster has an equatorial mount, some buyers have had issues viewing certain spectacles, or finding specific features in the night sky.

Additionally, other buyers mentioned that the telescope itself is of good quality, but the mount and tripod are less well made.

This telescope is designed for first-time astronomers, so theoretically it should be simple enough to set up. Some users had a few issues with finding the instruction manual difficult to understand, but overall most people managed to set up the telescope with minimal trouble.

Another great feature of this telescope is that it requires no tools to set-up, and the purchase contains everything you need to get started on your new adventure in astronomy.

The Celestron Astromaster 130eq comes with a two-year warranty, allowing you to buy with confidence.

Another benefit of this company is that their tech support is US-based and is free to access if you do encounter any issues with your telescope. They also provide a range of how-to videos online to help you get the most out of your ‘scope.

What we dislike about the Astromaster 130EQ

Finding a telescope that will allow you to view stars, planets, and the moon in relative detail, as well as deep night sky objects, can be challenging when you’re on a budget.

The Celestron Astromaster 130eq offers great bang for your buck, as it comes with everything you need to get started in the world of astronomy. This makes it ideal for first-time astronomers or kids who want to start exploring the night sky.

The telescope comes with many great features, such as EQ mount and StarPointer, which makes finding specific objects easier and allows you to reduce the time it takes to focus on a particular night sky object.

We also like the lightweight feel of this telescope, which makes it great for taking on road trips or camping trips where you want to do some stargazing.

Like we said above, if you already have some experience in astronomy or relative knowledge of telescopes, then you’re probably better off spending a few hundred dollars more on a more sophisticated telescope, but if you’re just starting out, the 130eq is more than capable of the job.